Oh yes. As mentioned in my previous few posts, I have been up to my elbows in chocolate recently. Here's what we made. 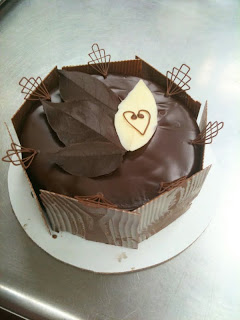 Inside the chocolate decor is a dense chocolate fruitcake~ Bet you a dollar you've never tried a chocolate fruitcake before. Around the cake is my first attempt at wood grain chocolate. Chocolate wood. Yum. Also on top are chocolate leaves. We dipped lemon leaves in chocolate, let them set up and peeled the leaves off to get the impressions of their veins, so simple yet super effective. Try it! Just note that you need to use a waxy leaf so it peels off easily~ Those little stringy decorations are hand piped onto parchment, left to set and placed onto the cake 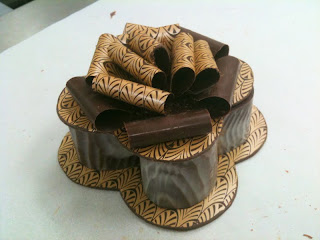 Here is my first attempt at a chocolate box! I made the templates myself and cut them out of semi-set tempered chocolate that I wood grained on one side, then placed transfer sheets on top for the design you see in gold. A technique our replacement chef on the day said would be impossible! 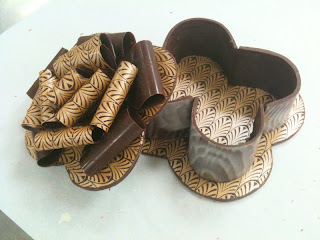 What I learned is, don't listen to people. Just try it yourself, just cos they couldn't do something doesn't mean you can't! 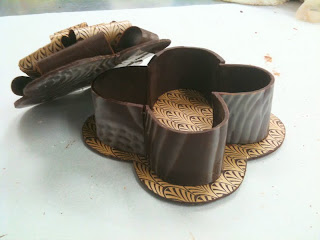 Each round corner was made individually then glued together with more tempered chocolate. You can see the wood grain on the bottom of the lid there :) I thought it was pretty cool. The ribbons were made on acetate, when it was slightly matt, I bent them over on themselves at the edges and let them set that way overnight then peeled the acetate off and voila! 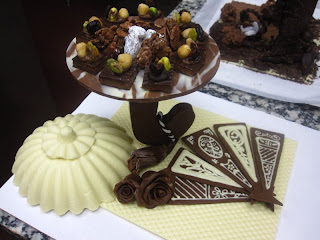 We were all tasked to make a chocolate stand. It had to be at least 6 inches high and a maximum of 12 inches across. I came up with this Victorian design 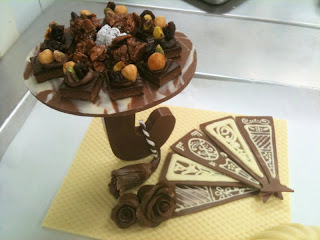 Firstly the day before, we made all the chocolate candies. Chocolate Carres (Dark chocolate sandwiching a mixture of crunchy feuilletine and praline paste), candied and chocolate dipped roasted almonds, Rochers (chocolate coated candied nuts with candied orange peel) and Mendiants (little drops of chocolates topped with dried fruit and nuts- so good. My fav combination was a toasted hazelnut on a milk chocolate droplet with some currants and candied orange peel) 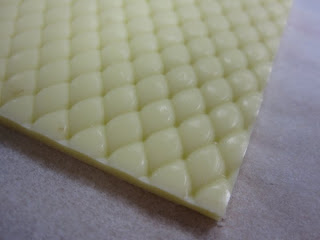 I made the base out of white tempered chocolate, it came out really nicely as you can see from the shine. I poured the chocolate onto a texture sheet and let it set up until it released by itself from the mold 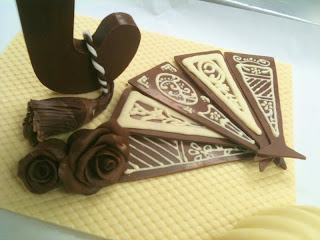 I then made the umbrella stand using tempered milk chocolate poured into a candy cane cookie cutter and left it to set up overnight at room temperature. The fan pieces were cut out of a thin sheet of tempered milk chocolate with another cookie cutter mold that I found, I believe it was meant to  be a tall glass of sorts, but it worked perfectly as fan pieces don't you think?! Score. The details were then piped on by hand with some tempered white chocolate in a paper cone. The tassel and roses were made out of molding chocolate :) 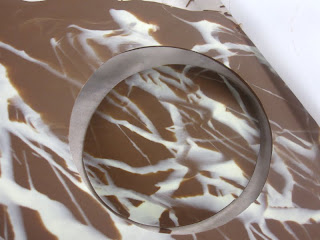 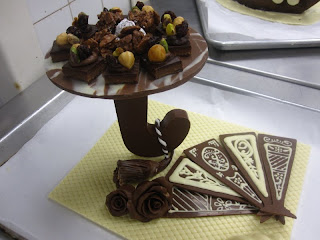 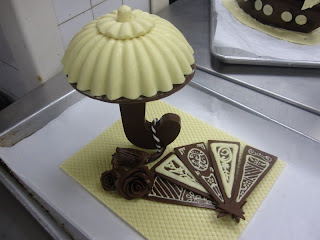 Initially I had the idea of making the umbrella top lace-like by piping chocolate onto the outside of a round mold or onto a balloon and then releasing it so that it forms a lace cage of sorts, allow you to see the candy within. Unfortunately, after 3 failed attempts using 3 different techniques, it was unsuccessful and I molded the top out of 2 molds and stuck them together instead. The tip of the umbrella was made from a chocolate bon bon mold and stuck on with chocolate as well.
Tip of the Day!!
When working with tempered chocolate, note that as it sets, it will shrink slightly and curl, so if you want your work to be flat, sandwich your chocolate between 2 flat wooden boards and leave to set overnight for best results. Chocolate that sets against acetate (smooth plastic) will peel off with a brilliant shine, as compared to a dull finish if left to set on parchment or other surfaces.
FYI for those who don't know what tempered chocolate is, it is the heating and cooling down of chocolate to specific temperatures and agitated by stirring, to produce a chocolate that "snaps" when broken, melts evenly in the mouth for a luxurious mouth feel, sets up quickly and has a glossy sheen to it. This is done for chocolate that is to be eaten or used in showpiece work. It doesn't sound like much and just like you, I often wondered why I needed to go through all the trouble to just make shiny chocolate. But it's much more than that. If you ever had a piece of out of temper chocolate, that grainy texture will haunt you forever. Only thing that can bring back your love for chocolate would then have to be the smooth velvety unctuous sensations of a good piece of tempered chocolate slowly melting on the tongue.
Btw. Chocolate is an aphrodisiac. Eat irresponsibly.
xoxox
Posted by Tricia Lim at 2:37 PM

Tricia Lim
Brooklyn, New York
Graduate of the FCI as of 31st October 2011 Singer, writer, lover of all things pretty and aspiring Pâtissier

Some songs sung by me...